Recap / Big Finish Doctor Who Specials The Light At The End 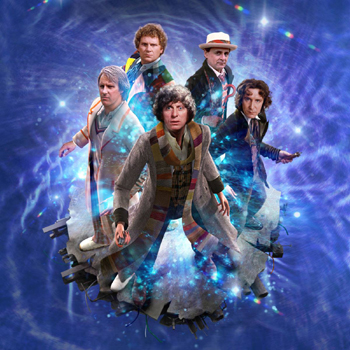 The great Milestone Celebration of Doctor Who and Big Finish does it in style, involving Tom Baker, Peter Davison, Colin Baker, Sylvester McCoy and Paul McGann as their respective Doctors alongside the Master and the first three Doctors in a Batfamily Crossover.

It's November 23rd, 1963 and a man by the name of Bob Dovie is playing with his son, Kevin, as a police box smashes into their house (and takes out their chimney). Little does he know that this series of events is going to embroil him as a pivotal part of a much larger scheme…

It's also a day that sets in motion a catastrophic chain of events which forces the first eight incarnations of the Doctor to fight for their very existence. As a mysterious, insidious chaos unfolds within the TARDIS, the barriers of time break apart…

From suburban England through war-torn alien landscapes and into a deadly, artificial dimension, all these Doctors and their companions must struggle against the power of an unfathomable, alien technology.

From the very beginning, it is clear that the Master is somehow involved. By the end, for the Doctors, there may only be darkness.