Recap / Doctor Who S22 E1 "Attack of the Cybermen" 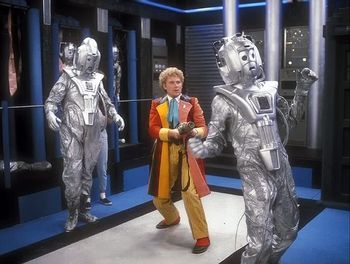 "No one insults my coat and gets away with it!"
Peri: Will it believe you?
The Doctor: If it doesn't, I shall beat it into submission with my charm.
Advertisement:

The one with a fat Cyberman.

Our story starts out in the sewers of London, where a pair of workers are attacked (and presumably killed) by an unknown alien force... which has its name in the title. Unfortunately, this is NOT the first time that the reveal of the monster has been spoiled by the title.

The Doctor, having greatly calmed down since trying to kill Peri with his bare hands, has randomly decided to try and repair the TARDIS, specifically the Chameleon Circuit that's been malfunctioning since 1963. This involves those "roundels" of the control room being taken off and revealing the circuitry behind them. For now, it doesn't work, but the TARDIS is tossed about and our pair of travelers are also tossed about. Luckily, the Doctor manages to land the TARDIS in 1985 and uses the scanner screen to show off Halley's Comet. Peri, somewhat understandably considering this Doctor's track record so far, is more concerned about crashing into the comet rather than going "ooooh" over it.

Meanwhile, on Earth, Commander Gustave Lytton has been living a somewhat low-key life after quitting his job for the Daleks. And by "low-key," we mean "organized a gang to rob banks throughout London." And, indeed, Lytton's newest plan is to steal £10 Million in diamonds by digging under the bank and breaking up through the ground of the vault. One of his gang, Russel, is worried this will bring the cops down on them. Lytton leads his gaggle of gangsters down into the Absurdly Spacious Sewer of London, but not before activating a transmitter of some sort.

Up in the TARDIS, the Doctor and Peri pick up a distress signal and drop into a scrapyard in the middle of the city.note Supposedly, this is the same location as the series' very first episode, but it's blatantly not. The TARDIS' Chameleon Circuit has apparently been fixed to an extent, as it has decided to blend in to the surroundings as a large fancy brand-new stove. The Doctor drags Peri around for a little while, continually calling her the wrong name...Zoe, Tegan, Jamie...while he looks for the source of the signal. They can't find it, so they run back to the TARDIS - but not before the Doctor muses over a sign reading I.M. Foreman and calls Peri "Susan."note Seriously, start up a drinking game over the Continuity Porn in this story. You'll be dead before the second episode! After they leave, though, the Doctor realizes that the signal was being bounced around and finds where the real signal source goes.

Landing in a car repair shop, the TARDIS decides to turn into a pipe organ. It's nice to see the TARDIS has somehow inherited this incarnation of the Doctor's sense of dress perfectly. Our time traveling heroes muck about and are nearly ambushed by a random pair of policemen toting guns.note The episode gives us no reason for their appearance, it just assumes that you remember they're the two guys who escaped with Lytton at the end of Resurrection, but of course there's no particular reason that you should remember this. According to the Expanded Universe, they're Lytton's bodyguards. This does make some sense, but not much. Soundly trouncing them, Peri and the Doctor decide to also go into the sewers for... some reason.

Back with Lytton, one of the four gangsters has decided to head off for a smoke... and is promptly beaten to a gruesome bloody death by whatever assaulted the pair of workers in the start of the episode. Lytton and his remaining team come to a dead end, only to be ambushed by Cybermen. One of Lytton's men decides to shoot the Cyberman, but Lytton decides to disarm his comrade and offers his services to the Cybermen. Russel, quite sensibly, flees from the scene—only to run into the Doctor and Peri coming the other way. Wow, what are the odds?

Wayyyyyy off on another planet, the Cybermen's adopted homeworld of Telos, a pair of guys named Bates and Stratton stumble around, working for the Cybermen in shiny silver suits. They decide to rebel and kill a Cybermen to use the head to sneak into Cyber Control to... do something. Apparently, the Cybermen have stolen a time machine—which may or may not have once belonged to Bates and Stratton—and will soon use it for their own, nefarious ends. Bates and Stratton want to steal it back and use it to escape.

Back on Earth, the Doctor, Peri and their new friend Russel go back to the TARDIS (but not before the Doctor kills a few Cybermen with a Sonic Lance) to talk about what they're going to do next. Sadly, they're ambushed by Cybermen—and their new pets, Lytton and his crony Griffiths, are with them. Russel is killed promptly after killing two Cybermen with just a simple pistol, and no one mourns his passing. The Cyber Leader decides that killing Russel just wasn't enough, so he orders his men to kill Peri as well.

Well, the Doctor doesn't really like the idea that Peri could be killed, so he threatens to blow up the TARDIS if they do. The Cyber Leader decides "well, why not" and simply exposits at the Doctor instead. As it turns out, the Cyber Controller is totally still alive and not dead despite getting his shit well and truly burnt up by some pretty substantial voltage the last time we saw himnote He also seems to have gained a few pounds since the last time we saw him. Same actor under the suit, however, but that's neither here nor there. Because the story is nowhere near over, the Doctor begrudgingly agrees to set course for Telos and is then tossed into a random room somewhere in the TARDIS alongside everyone else. One wonders if that missing Cyberman from a previous regeneration's adventure showed up again during this time. Either way, the Doctor fills everyone (audience included) in on what the hell's going on, explaining about the Cybermen, their leadership and their adopted planet. He also adds information in on the totally old-Who classic aliens the Cryons. Apparently, the Cybermen killed all of them off and used their cities to keep their people in suspended animation. And Lytton knows all of this too, which will certainly never tie in to anything in this story.

Meanwhile, a lone Cyberman (Cyberperson?) is revived on Telos... only for it to go randomly berserk for no reason and destroy things. Apparently, this is happening to all the Cybermen in stasis, but we're never told why in this story.note Or any story. It's implied to be the work of the Cryons, maybe, but never stated outright. Anyway, the TARDIS arrives on Telos, this time turning into a massive ornamental gate that everyone walks through... but they're in the Tombs of the Cybermennote Which look nothing like it used to, incidentally. rather than Cyber Control because the Doctor decided to fudge the coordinates. As everyone goes up to Cyber Control, another random Cyberman breaks out of his cryo-freeze chamber and goes berserk because why the fuck not? Lytton, Griffiths and Peri escape—only to nearly get killed by another rogue Cyberman because... well just because it's been a while since something really contrived happened. Luckily, they're saved by the Cryons! Peri goes off to get out of the way with one Cryon while another Cryon meets with Lytton and Griffiths. As it turns out, Lytton is really working for the Cryons in their struggle to destroy the Cybermen and prevent them from using B&S' captured time machine. Griffiths joins in, mostly thanks to the fact that the Cryons are filthy rich and offer him £2 Million in diamonds. The two then find B&S, and it is revealed that the pair of criminals are actually failed Cyber-conversions, left with robot arms and legs.

The Cybermen, meanwhile, show off some remarkably good thinking and decide to lock the Doctor up in a closet doubling as a refrigerator. The closet, which is also imprisoning a Cryon named Flast, contains enough volatile to completely destroy the Cybermen on Telos with little effort, though it's completely inert at low temperatures, that and the doctor probably wouldn't know what they were if it wasn't for Flast.

Predictably, the Doctor and Flast come up with a plan in order to make sure everything on Telos gets blowed up real good—but it seems that Flast cannot leave the room, as Cryons cannot survive at room temperature. But hey, she's willing to warm up the explosives to the point where they'll automatically explode. The Doctor uses a small amount of the explosive to kill off the Cyberman guard, then just leaves Flast to await her death after thanking her for the help she provided .(Though she would have died anyway since she can't leave the room and was ready to sacrifice her life to stop the Cybermen.)

Lytton is tortured by the Cyber-controller for information before being forced to undergo cyber-conversion. The Doctor and Peri make their way separately to the TARDIS where, to lure the Cyberman guards out, the Doctor activates a distress beacon on the body of a dead Cyberman. Despite being forced into the corridor and perishing, Flast hides the sonic lance in a box of vastial, where it slowly warms up. When the time vessel lands at the platform, the would-be hijackers (Bates, Stratton and Griffiths) try to board it, but are mercilessly cut down by the Cybermen inside. As the guards leave the TARDIS, the Cryons destroy them at the cost of their leader's life.

The new Cryon leader, Rost, urges the Doctor to leave before Flast's explosion is triggered. The Doctor prepares to go, but Peri urges him to go back and rescue Lytton who, for once, was helping the right side. The TARDIS materializes in the conversion centre (looking like a police box again), but it is too late to save Lytton, who begs the Doctor to kill him.

Possessing perfect dramatic timing, the Cyber Controller and several Cybermen show up and threatens the Doctor with guns. Lytton decides he'll have none of that shit and stabs the Cyber Controller, letting the Doctor grab the Controller's gun. This turns out to be Lytton's final deed, as the Doctor blows away all of the Cybermen with his newfound love of violence. The Doctor doesn't really want to leave Lytton behind, but Peri drags the Doctor off just before the place explodes. Inside the TARDIS, however, the Doctor expresses regrets over how he treated Lytton and how wrong he was about the guy.

Season 22 was an oddity for Doctor Who. Beginning with this serial and continuing for the remainder of Season 22, episodes were 45 minutes in length (as opposed to previous episodes which were 25 minutes long), leading to many two-parters and one three-parter. This format would return 20 years later when the series resumed in 2005 with "Rose".