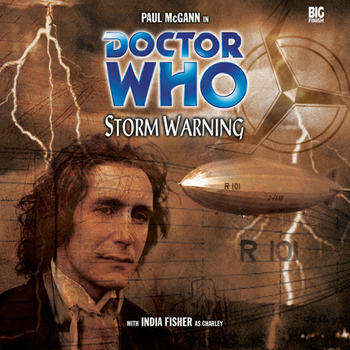 The journey of filling a thousand narrative blanks begins with a single audio.
Advertisement:

The one that started the longest Trauma Conga Line any Doctor ever endured.

This is the first Big Finish Doctor Who audio drama featuring the Eighth Doctor, five years since he made his debut in the TV movie. It is also the debut story of India Fisher as the Eighth Doctor's first audio companion, Charley Pollard. (Though not his first actual companion, as he had had several in both his book series and comics series by that point.)

It would turn out to be the first of an extensively long line of audios for Paul McGann when his character became a runaway hit. The audios began to explore the untapped potential of the Eighth Doctor, where the sky's the limit.

October, 1930. His Majesty's Airship, the R101, sets off on her maiden voyage to the farthest-flung reaches of the British Empire, carrying the brightest lights of the Imperial fleet. The Eighth Doctor ends up on the R101 entirely by accident, and soon meets an upper-class runaway named Charlotte Pollard (Charley for short), who has snuck aboard in men's clothing. She dreams of being an Edwardian Lady of Adventure, and was rather hoping to hitch a ride to a romantic encounter on a rooftop in Singapore. The Doctor knows what will happen to the ship, but before he can make his way back to the TARDIS, he's captured and mistaken for a German spy. Playing along as Herr Dr. Johann Schmidt, he realises that a Vortisaur (a vortex pterodactyl) has followed him in from the time vortex, and he tames the beast by letting it drink his blood. It's not the only alien aboard, though — the mysterious special passenger is the Prime of the Engineer caste of the Triskele. The three-caste race is looking for a new Lawgiver, and they have their eyes set on Lord Tamworth. The Uncreator caste, however, are also eyeing Rathbone, an Afrikaans traitor who's easily manipulated. He shoots the Triskele Lawgiver, which sets the Uncreators free of their mental bond with the law and gives them a great excuse to declare war.

However it turns out the new generation of Triskele Uncreators, who have never encountered predators before, are frightened of the humans, and scared away by roaring. In the end, the Doctor convinces the Triskele that they can live without a Lawgiver if their Engineers and Uncreators learn how to work together. It will take time and effort, but it's possible. Tamsworth, now the new Lawgiver, leaves to teach the Triskele this. But Rathbone gets his hands on the Triskele energy weapon. The Doctor needs prevent history from being changed by alien technology. He doesn't need to do anything special to save the day, though, as the crash of the airship makes Rathbone's plans moot anyway. But since he and Charley manage to escape from Rathbone on the Vortisaur's back, Charley is now a living paradox — a girl who shouldn't be alive.

The Doctor briefly considers putting her back on the airship just before the crash so she'll die in her proper time. But he can't bring himself to do so, and they leave for adventures together with Ramsay the Vortisaur.