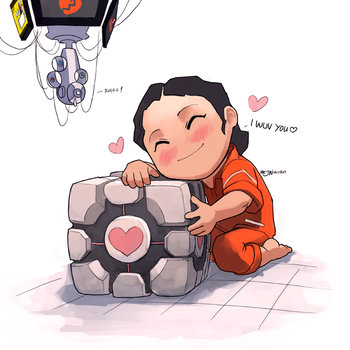 . Used with permission.
"Gentlemen...behold! I have made love to this machine! And now, upon retrospect, I ask why..."
— Dr. Weird [while gesturing to a lawnmower], Aqua Teen Hunger Force
Advertisement:

Shipping where one or both of the partners is an inanimate object — becoming, in effect, a Companion Cube. A common type of Crack Pairing in fandom. To some, this kind of shipping is made of Squick; to others, it's Serious Business.

Semi-justifiable if the object in question is an Empathic Weapon.

Compare Robo Ship (when part of the pairing is a sentient machine, including spacecraft and other vessels with AI), Cargo Envy (where someone else wishes they were the object in question) and Animal Sweet on Object (for when an animal falls for an object in-universe). See also Perverse Sexual Lust (which is the real person-to-fictional character version) and I Call It "Vera". Contrast Enmity with an Object.

Not to Be Confused with Cargo Cult, IKEA Erotica and a literal kind of ship that carries cargo, goods, and materials from one port to another

, which is Just for Pun.

In "Objects of Desire", Danny has apparently banged all of his girlfriend's property.

In "Objects of Desire", Danny has apparently banged all of his girlfriend's property.