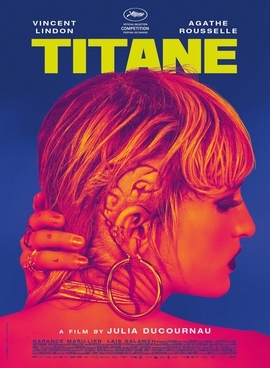 Titane (French for "titanium") is a 2021 film directed by Julia Ducournau (of Raw fame) and starring Agathe Rousselle and Vincent Lindon.

As a child, Alexia is mortally wounded in a car accident and gets a titanium prosthesis in her head. As an adult she becomes an exotic dancer with a fascination for cars, and a serial killer.

Forced to flee from the police, she assumes the identity of the long-lost son of a fire chief.

The film won the Palme d'Or award at the 2021 Cannes Film Festival.