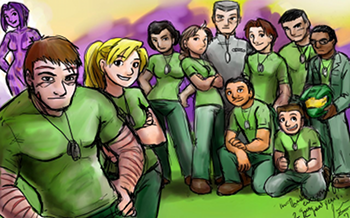 Welcome to the Company. Before you ask, that is, in fact, Master Chief, sans helmet. Later, sans shirt.
Company0051 is a Halo Fan Webcomic written by Jameson 9101322. It is hosted on DeviantArt and details the adventures between Master Chief and a company of in-training teenage Marines.
Advertisement:

Shortly after the events of Halo: Combat Evolved and Halo: First Strike, Master Chief and Cortana have been brought to the planet Noiosi for the analysis of a retrieved Covenant data pod. While Cortana is hired to crack it, the decryption proves difficult, until Cortana comes up with the idea of using the reverse-engineered AI network inside John's helmet to simulate a Covenant one. Reluctantly giving up his armor, John stays at the military camp on the planet, unhappy about his forced stay.

Then there are kids. Excitable, inexperienced, and often obnoxious, John is forced to cope with them while he waits for her to finish her work. Eventually, he begins to settle into the campsite, and slowly begins to discover the relationships inside the community of Company 0051.

The webcomic was started in 2007, and came to a finish in 2012. It's become a fairly popular series, and encourages an actively participating fandom, which refers to itself affectionately as "The Company." The official series page can be found here.