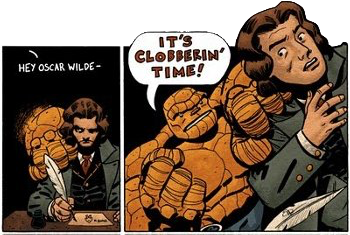 "This is the '90s. You don't just go around punching people. You have to say something cool first."
— Joe Hallenbeck, The Last Boy Scout
Advertisement:

It is almost an official duty of an Action Hero to deliver sardonic one-liners. And what better time to produce one than just before the execution of their other official duty — kicking ass.

Chew Bubblegum and The "Why Wait?" Combatant are particularly popular examples. See also Badass Boast, Badass Creed, In the Name of the Moon, and My Name Is Inigo Montoya. Contrast Pre-Mortem One-Liner, which is often used to end a fight (namely before killing someone), or Bond One-Liner, which is used once the fight is over.

The power of teamwork takes on a more literal meaning than usual, as Optimus Prime and Leobreaker combine to take on Starscream.

The power of teamwork takes on a more literal meaning than usual, as Optimus Prime and Leobreaker combine to take on Starscream.