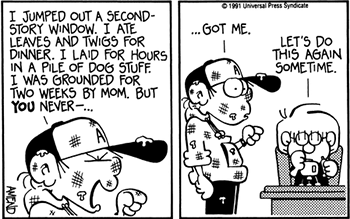 Jason's finest 12 hours.
"The more employees you have, the more you have to worry about them. Deliver some vague threats and a few hundred bucks to a security guard. If he's honest he'll tell his boss, who then wonders who wasn't so honest. For the cost of a nice dinner, you can get a whole security team canned."
— Burn Notice, "Wanted Man"

Alice tells Bob that she will "get him". Bob freaks out and goes to great lengths to avoid falling victim to her plans. In the end, it turns out that Alice wasn't going to do anything to him and that her whole plan was to just sit back and let his paranoia make him do stupid things to himself. A variation commonly occurs where the gambit is not intentional, and Alice admits that she actually was going to do something to him, but everything Bob did to himself was much better than what she had planned.

This is usually a case of Restrained Revenge, although it can also be a practical joke with no prior provocation. It may overlap with Self-Fulfilling Prophecy when paranoia of a specific event (even if it's unlikely) causes said event to occur. The nastier versions may overlap with Fright Deathtrap.

Since it relies on the mark's paranoia, it resembles a Batman Gambit. Compare Confound Them with Kindness, where Alice acts nicely towards Bob after the fact to confuse him. Often this relies on making something innocent look like Shmuck Bait. See also Kansas City Shuffle, which involves making the target suspect something and try to counteract that, then doing something else that needed them to do what they just did. Also #20 of The Thirty-Six Stratagems. Contrast Properly Paranoid.

In failing to steal a hefty amount of money from Scrooge with the time-teaser, Glomgold decides to only take 87 cents, knowing that the hilariously small amount would still do the trick.

In failing to steal a hefty amount of money from Scrooge with the time-teaser, Glomgold decides to only take 87 cents, knowing that the hilariously small amount would still do the trick.