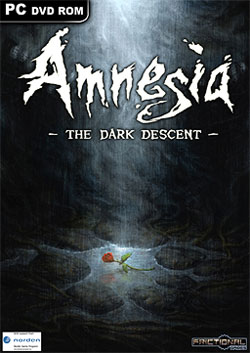 "I have tried everything and there is no way to fight back. You need to escape it as long as you can. Redeem us both Daniel. Descend into the darkness where Alexander waits and murder him."
— Your former self, Daniel
Advertisement:

Amnesia: The Dark Descent is a critically acclaimed

survival horror with adventure game elements from the Swedish indie studio Frictional Games. It's a Spiritual Successor to their previous Penumbra series of games, sharing many elements of gameplay and storytelling with them.

Daniel, the playable Non-Action Guy, wakes up in the dark of an ancient creepy castle, Brennenburg, without memories. The first thing he finds is a note to himself, which informs him that he has been deliberately self-inflicted with amnesia so that he can make a dark descent into the heart of the castle and kill the proprietor, Baron Alexander. As he journeys further within the bowels of the Prussian estate, Daniel comes across his own diary entries, hinting at otherworldly influences, particularly the dangerous living 'Shadow' that pursues him for something he did in his past, killing everyone it comes across. He also finds notes left by an assortment of castle-dwellers that elaborate on the sinister events that have taken place there.

But mostly, he finds nothing...

A later update added two new components to the game for free:

In 2013 a Non-Linear Sequel, entitled Amnesia: A Machine for Pigs, was published by Frictional Games, with primary development by The Chinese Room, the team responsible for Dear Esther.

. Unlike A Machine for Pigs, it will be developed by Frictional Games themselves and ties in much more closely with the first game.

Not to be confused with the other Amnesia video game series or the Amnesia: Yume Nikki fan-game.

open/close all folders
Tropes in Amnesia: The Dark Descent
Tropes in Justine