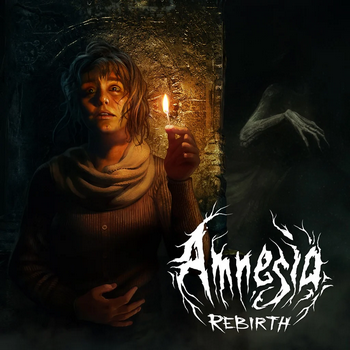 Amnesia: Rebirth is the third full installment in the Amnesia series of Survival Horror video games, developed and published by Frictional Games for PS4 and PC released on October 20th, 2020.

Taking place in the same universe as the last two games, set in 1937, thirty-eight years after A Machine For Pigs, a stark contrast to the Victorian London and the medieval castle of the first two games. The story follows Anastasie "Tasi" Trianon, a woman who, alongside her husband Salim, joins an archaeological expedition into the Algerian interior, only for their plane to mysteriously crash in the desert. Waking up to find herself alone in the wreckage, Tasi must try to find Salim, trying to survive against an unknown horror that stalks the sands they are stranded in.

But mostly, she finds nothing...