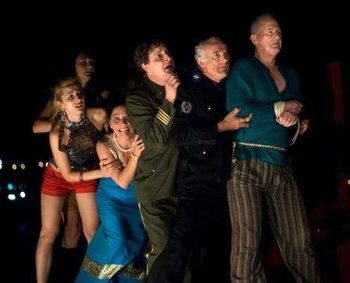 It's the cowering conga!
"Bob! Prepare for the ass-kicking of your life!"
[moves behind George]
"And George is the one that's gonna do it!"
— Mega Man, Bob and George
Advertisement:

It's only natural to cower in the face of dangernote this is actually a survival mechanism, which works for small animals because many of the larger animals that eat them can see motion really well, but have trouble spotting stationary things. Some animals, like humans and eagles, have good enough eyesight that they may be able to spot the "frozen" animal anyway, though it's still easier to spot something that's moving. Others don't even rely on eyesight, utilizing other senses such as smell or heat-sensing instead. Still, you'd be surprised how well this trick can work... for smaller animals, anyways. For larger creatures like humans, it's mostly an evolutionary holdover, though it might still work on occasion. As such, many a classic Distressed Damsel and fearful child will cower behind the nearest Love Interest, parent, or Big Damn Heroes when presented with peril. Of course, most conscientious heroes and even Innocent Bystanders will naturally interpose themselves anyway to protect other innocents (and perhaps pointlessly, but they do get props for chivalry). This kind of cowering stems from the classic pose of hero and heroine facing a monster on Film Posters for Touch of the Monster: the hero has a gun in one hand pointed at the beast, his other hand holding the Love Interest back, while she clutches his shoulder with one hand and covers her mouth from shock with the other.

There's another kind of character who cowers this way too, the Dirty Coward. He'll grab a nearby Innocent Bystander and use him as a Human Shield, hide behind the Littlest Cancer Patient when the Serial Killer with a soft spot for kids shows up, and might even shove his Love Interest towards the Martian Woman Stealer. Villains also tend to do this when faced with an implacable hero, inverting the cower by using the Love Interest to hide from him!

Sometimes this is used for comedic effect, with a hero who is Afraid of Needles reacting with complete terror to mundane things, sometimes even jumping into his Sidekick's arms or ducking behind his Love Interest like a Distressed Damsel. The Fish out of Water might hide from otherwise harmless things too (and notice who/what they're hiding behind looks far more threatening). See also Pose of Supplication. Bonus coward points if the character also Screams Like a Little Girl. Compare Eek, a Mouse!!

Not to be confused with the former Head Coach of the Pittsburgh Steelers.