Literature / The Place Inside the Storm 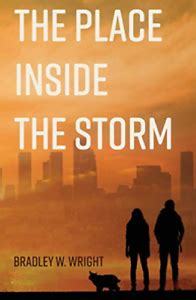 The Place Inside the Storm is a 2019 science fiction novel by Bradley W. Wright.
Advertisement:

In the year 2038, 14-year-old Tara Rivers is diagnosed with autism. Her parents are blackmailed into consenting for her to get a brain implant to make her more docile and socially oriented. To avoid this fate, she runs away with her robot cat, Xel, traveling towards her grandmother's home in PacNW, where she hopes she will be safe. Along the way she meets Loki, a boy with a brain implant that causes seizures and a limp, whom she brings along in the hopes that the doctors in PacNW will be able to remove it.

The Place Inside the Storm contains examples of: