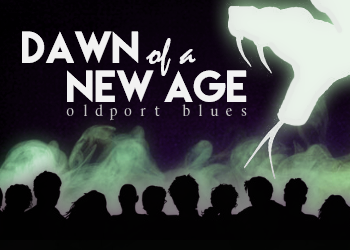 "You think they would just give kids powers and let them be? No. They create obstacles, stories, bad guys, good guys, all so they can see just how far they can take those kids."
Unfortunately, the events that would follow that fateful Wednesday afternoon would shatter the beliefs of the Rogers High staff. Such was the fate of the old: to become mere witnesses and bystanders, as the young take the reigns of fate and lead it into whatever horizon they deem suitable at the moment. If any of the members of the Rogers High staff gained a mere glimpse of that horizon, well... one of them might have burned the entire place to the ground so as to save humanity from the suffering that would follow. For that brief glimpse would give that person the knowledge that nothing would be the same from the moment the clock struck 4:45. Which should be right... about...
[power goes out]
—Stratofarius, the Opening Post
Advertisement:

Dawn of a New Age: Oldport Blues is a play-by-post superhero roleplay hosted on the TV Tropes forums. Created by Stratofarius, the game is a Continuity Reboot of the previous Dawn of a New Age thread created by GrateEscape in 2015. Previous characters and concepts return, but with a whole new coat of paint.

Set in Oldport, Rhode Island, the story opens on a number of teenagers staying after school for various reasons. A power cut leads into a bizarre supernatural incident, where smokey, snake-like apparations attack the children and imbue them with superpowers. Henceforth, the teens must learn how to control their newfound powers and get to the bottom of what exactly happened to them.

A quirky author whose book parallels the empowering event. A mysterious agent armed with technology to nullify their powers. Flashes of the future depicting villanous organisations and a despotic government. Time will tell how all of these tie together- assuming the children can survive until then...

Despite the fantastical threats that face them, the RP focuses on a down-to-earth examination of how receiving superpowers would affect a teenager. Real-life social issues and prejudice affect the characters, as does all the baggage that comes with being a young person still trying to understand the world. Which is not to say that it's all doom and gloom: for all that their newfound powers can be dangerous, they also open up new avenues for heroism, friendship, and fun.

The roleplay can be found here

. Supplementary material can be found here

Dawn of a New Age: Oldport Blues provides examples of: