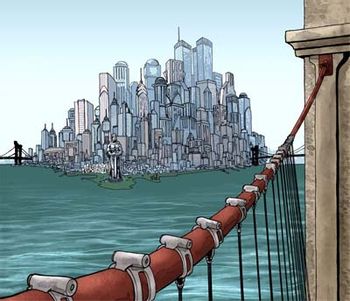 "Like a Saturday Morning Cartoon that airs on HBO."
Advertisement:

Created in 2007 and currently in its fifteenth year of operation, Freedom City Play-By-Post

is the oldest and most active play-by-post setting on The Internet for Mutants & Masterminds, the superhero role-playing game by Green Ronin. Taking place (mostly) in M&M's default Freedom City setting, in the present day, the game has become a massive Shared Universe, involving dozens of active players with over a hundred Player Characters. Most of the staff are fans of both superhero comics and TV Tropes, and they welcome characters who draw from the common tropes and themes of superhero comic books.

The default game setting is the "World of Freedom" described in Freedom City and its supplements. In 2016, Bedlam City

was integrated into the FCPBP game world. In 2019, the city of Vibora Bay was imported from the Champions setting.

This isn't the place for bloodthirsty Iron Age vigilantes, or for superheroes who think that the whole idea of superheroes is silly. The feel of our Player Characters falls somewhere between the Silver Age, the Bronze Age, and the Modern Age. They're all basically the Good Guys. Character concepts should pass tests like "Would people buy a comic book about this character?" and "Why would anyone talk to this character?" If your character would fit into the DC Animated Universe, then they'll probably fit in here, too.

Many of the tropes in this game can be found on the pages for the Mutants & Masterminds role-playing game, or the Freedom City setting for that game. This page is intended for tropes unique to FCPBP and its characters.

This play-by-post setting provides examples of: