Trap Is the Only Option 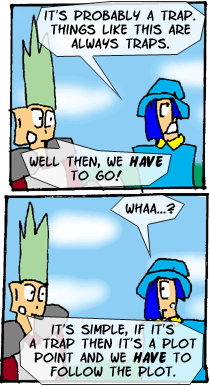 "There is a Russian proverb: The bear who sees the trap cannot be caught."
— Josef Yurinov, Mercenaries: Playground of Destruction
Advertisement:

When the heroes consciously recognize a trap when they see one, but elect to walk into it anyway.

The reasons for this vary. Sometimes, it's because one of the hero's True Companions or a Love Interest is being held hostage, and the hero can't turn his back on them. Sometimes it's because the heroes need a lead to the villain's plot and taking the bait is the only way. Proceeding may literally be the only option, e.g. it's the only way out of the maze they're in. Perhaps the heroes have an idea of what's in store for them, and the makings of a plan. Or maybe it's just because the hero enjoys a challenge. In any case, the choice is made: trap or no trap, it's their only chance.

It doesn't always work. Sometimes it turns out there's little discernible difference between having sprung the trap on purpose than in having walked into it accidentally. Heroes have walked into their doom in the invocation of this trope. But it can pay off. Three types of heroes have been especially known to succeed: The kind that can think like a Chessmaster and use some critical piece of knowledge of the plan to foil the villain's aims while apparently "falling" into their trap, the kind that is a master of thinking on their feet and making things up as they go along, and the kind that is simply far too tough and/or far too stubborn to be stopped by such petty trickery. In this case, the trap-layer may well end up Bullying a Dragon - in the worst-case scenario, their failed trap might have done nothing more than struck a nerve and made the hero decide that It's Personal.

Video Games may sidestep any logical rationale at all for walking into a trap, leaving Stupidity as the Only Option. The characters are controlled by you, and YOU are electing to walk into the trap because it's the only way to progress the game. But the in-story reason for this happening is as likely to be that the characters simply are dumb enough to fall for obvious Schmuck Bait, rather than having consciously realized the nature of the trap. If no rationale is given, the trap-springing falls under Stupidity Is the Only Option rather than this trope. Only if the characters in the game itself recognize that it is a trap, and supply a reason for tripping it deliberately, is this trope being invoked as well.

Compare Schmuck Bait. See also Kansas City Shuffle which is built upon this trope: The con relies on the mark knowing there's a con but underestimating it. Contrast Lured Into a Trap, where the heroes never realized it was a trap until it was too late.