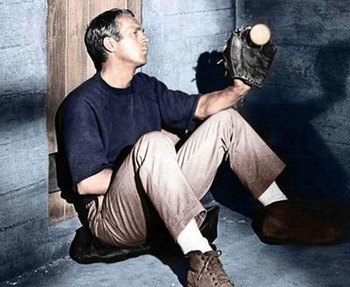 Locked up all by yourself, you have to pass time somehow.
Advertisement:

A trope popularized by the prison movie The Great Escape: a character locked up in a prison cell (or some other place they are unable/not allowed to leave, like being grounded), often in solitary confinement, faced with boredom and little else to do, passes time by sitting down against one of the walls of the room, throwing a ball (usually a baseball, but variations are possible) at the wall opposite of them and catching it when it bounces back, over and over. Most of the time with a bored expression on their face and clearly not putting much effort in the throwing/catching.

Along with Captivity Harmonica, it perfectly demonstrates the boredom and isolation an imprisoned character suffers through.