I Have This Friend 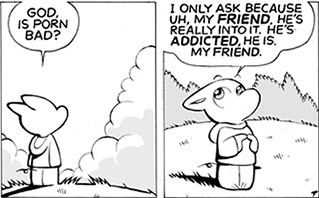 Denise: Dad, I have a friend that wants to talk to you about something important.
Cliff: Is this person related to me?
— The Cosby Show
Advertisement:

So you have a... problem. Maybe you just wrapped dad's car around a tree, maybe you've been snorting coke, maybe you just opened a dimensional rift that endangers the future of humanity, whatever, but nobody knows about it. Still, you can't resist the urge to find out what would happen to someone who, oh say, for instance, might have, for example, hypothetically, possibly, may have, kinda sorta... did something really really really bad. Sometimes your mom/dad/friend/boss/superior officer will catch on right away, sometimes they're going to unwittingly scare you out of telling them what happened until the situation is much, much worse. Either way, hilarity is likely to ensue.

That is, unless it's a Trial Balloon Question, in which case there's more likely to be broken hearts and blood.

In an interesting twist, when you do in fact have a hypothetical situation, or you actually are asking for advice for a friend, 9 times out of 10, whoever you're asking will assume that you're using this trope. Another twist is to slip into first person before you're done describing the situation. Played for laughs, a character will describe the situation in third person and then ask for advice in first person. Played for drama, it may be made obvious that both sides are fully aware of the true nature of the situation but only feel comfortable speaking about it in third person.

See Comic Role Play for a similar trope. Also compare to It's for a Book. See also …And That Little Girl Was Me, for a similar deception regarding someone's backstory. The Confidant can usually be told the non-hypothetical version without freaking out. Compare Mistaken Declaration of Love.

And yes, this trope is definitely Truth in Television. It is probably more common in real life than it will ever be in fiction. If you haven't pulled this trick yourself, you'll most certainly have met someone who did. Or, if you actually are referring to a friend, confront the automatic presumption that you aren't. To experience it instantly, go to a forum with a userbase primarily consisting of teenagers, open some threads about problems of a sexual nature, and it will not take you many minutes to find Real Life examples.

Sherry, knowing everyone who was given a hypothetical persona, figures it out. [1]

Web Original
Western Animation
So uh, can you help me out here? There's this friend of mine who ruined their life with TV Tropes...
Feedback

In the "Franklin" Movie "Back to School with Franklin," after a bad first day back at school, Franklin attributes things he's feeling about the new substitute teacher to his best friend, Bear.

Alternative Title(s): No Such Thing As A Hypothetical Question

In the "Franklin" Movie "Back to School with Franklin," after a bad first day back at school, Franklin attributes things he's feeling about the new substitute teacher to his best friend, Bear.