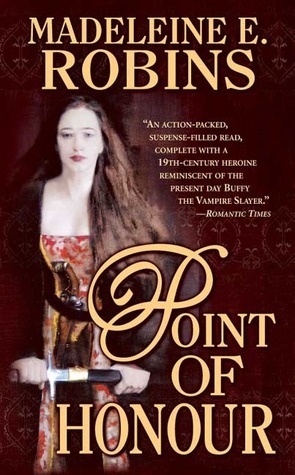 Point of Honour by Madeleine Robins is a detective novel which transplants the tropes of Dashiell Hammett and Raymond Chandler into an Alternate History version of Regency England, in which George III went insane somewhat earlier in life than he did in reality and as a result his wife rather than his eldest son became his regent. Sarah Tolerance is a disgraced noblewoman who ran away with her brother's fencing instructor. She now works as a private investigator, while living in a cottage behind her aunt's expensive brothel. She's hired by a nobleman to look for a fan; naturally, complications (and mayhem, and death) ensue. There are two sequels, Petty Treason and The Sleeping Partner.