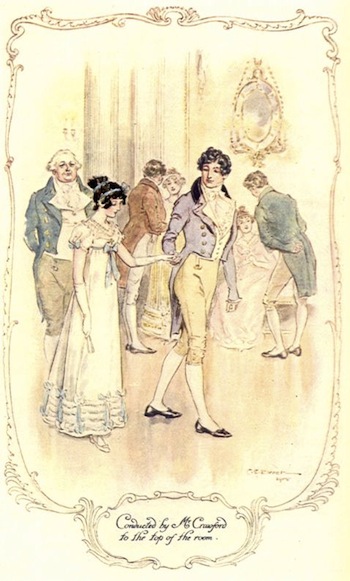 "Britain has the finest trade, the finest armies, the finest Navy in the world, and what do we have for royalty? A mad Kraut sausage-sucker and a son who can't keep his own sausage to himself."
— His Grace The Duke of Wellington, Blackadder
Advertisement:

The time of simplicity, sly rebellion, and Napoléon Bonaparte.

Home of Jane Austen and Charlotte Brontë heroines who assert their inner strength and independence by marrying dark, obscenely rich mercurial men. Said rich men usually wear long frock coats, tight pants, wispy hair with sideburns and live in big stone mansions which take up nearly half the planet. Women wear Groman inspired muslin gowns, which are popular from France, with high waistlines which they can actually breathe in (but which tend to look like nightgowns or maternity gear in the hands of a poor costume designer).

In a strict historical sense, the "Regency era" only encompassed the years 1811 through 1820, during which time the future King George IV held the title of Prince Regent due to his father, George III's, growing mental instability. In its broader literary sense, the term can be used to describe any period in British history ranging roughly from the end of the Seven Years War (known to the Americans as the French and Indian War) to the coronation of Queen Victoria (approx. 1760-1840).

The later years of The French Revolution (particularly the Directoire period of 1795-1799) and Napoleon's reign overlap the period, as neoclassicism stirs ideas, culture and Mediterranean revivals in full swing. Also overlapping in this period is the Federal years of the budding United States, as its territory doubled following the Louisiana purchase in 1803, the expeditions of Merriwether Lewis, William Clark, and their guide Sacagawea through the Pacific Northwest, and the socioeconomic growth and national awareness following the War of 1812 dubbed as the "Era of Good Feelings", drove the new nation westward, for good or for ill; and, following Napoleon's conquest of Spain, the Latin American Wars of Independence, which was kickstarted by Miguel Hidalgo y Costilla in Mexico and led by Simón Bolívar in much of South America.

During the time of George III, the regency and the reign of George IV, public morals were a lot looser than in the Victorian age. Fortunes were won and lost at cards, dice and the races, duels were fought (that's how Alexander Hamilton died), and bare-knuckle boxing was at its height with champions like Belcher, Gull and Cribb. Many famous men openly had mistresses and/or visited brothels. For instance, George IV's mistresses—note the plural—were openly living in Whitehall Palace in adjacent rooms to his actual wife. And George III's third son William, later William IV, lived with an actress for twenty years and fathered 10 children with her, and from whom much of the British upper crust is descended (including a rather lowly fellow named David Cameron). It wasn't until twenty years after William IV's death that his liaison was considered shocking enough to be censored. When the Prince Regent's only daughter Charlotte died in childbirth, the Prince Regent's brothers promptly dumped their mistresses in search for wives to produce legitimate heirs; one such brother, Edward, Duke of Kent produced one in 1819.

The Regency is also the era in which the Industrial Revolution got into full swing (with discoveries and inventions such as the metric system, vaccinations, cotton gin, gas street lamps, counting machines, batteries, food canning, corkscrews, steam locomotives, and bicycles coming from this era), so expect a fair number of industrial parvenus to show up. Also new is modern men's fashion—the idea that a man's clothes should be dark, sober, elegant, and tasteful rather than merely expensive comes from the Prince Regent's favourite dandy, Beau Brummell. Or to put it simply: this is where the granddaddy of the three-piece suit was born.

A quote whose origin has been lost describes a tomcat as being a Regency Gentleman on the grounds that he roisters all night, enjoys rollicking love-affairs and bare-knuckle fighting but always looks elegant.

A Nostalgia Filter during the late Victorian period, particularly with The Gay '90s and The Edwardian Era.

Tropes associated in this period include: