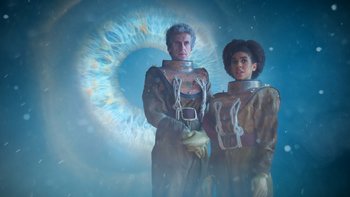 "Sometimes you see lights under the ice."
Click here to see the Radio Times magazine poster for this episode: 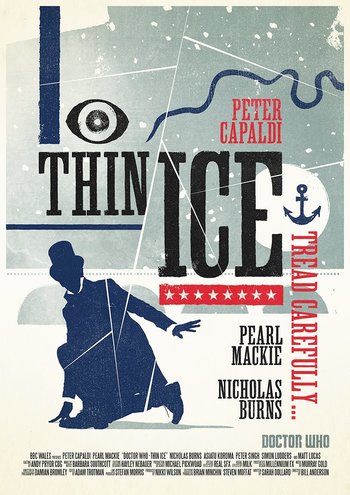 The one where the Doctor punches a racist.

Notable for being the first historical adventure since "Marco Polo" to make a real effort to accurately represent the ethnic pool, and heavily avoid a period piece whitewash.

Following directly on from the previous episode, the TARDIS is being "naughty" and has brought the Doctor and Bill back to England... specifically, to the frozen Thames in 1814. It's the last of the great Frost Fairs, a marvelous carnival that extends right onto the river itself. Neither can resist the chance to explore, and soon they're dressed to the period-appropriate nines.

But as they mingle with the masses, the twosome soon notices beautiful, mysterious green "fairy lights" shining beneath the ice — lights that seem to be seeking things. Then a child pickpocket, one of a gang of homeless urchins who have been promoting the Frost Fair, manages to swipe the Doctor's sonic screwdriver. As he tries to escape capture, he goes out too far, onto the thinner ice. As Bill watches in horror, the fairy lights circle beneath them, and he is pulled down through the ice. And though the Doctor grabs his hand, in the end all he is able to save is his sonic as the boy vanishes completely.

The Doctor has no time for tears, Bill finds. He is a man who must keep running, who cannot stop to remember all the lives he's lost, all the people he's killed. If he does, more people will die. As they seek out the answers to the mystery of what lies beneath the ice, they will encounter a variety of monsters — some of whom are human. And Bill will see beneath the stoic mask of her professor and discover a man with a soul of fire.