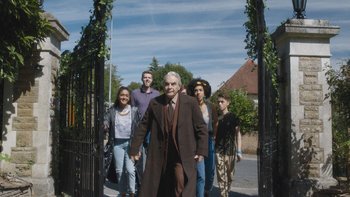 "Forgive me, but are you looking for somewhere to live?"note From left to right: Shireen, Paul, the Landlord, Bill and Harry.
Click here to see the Radio Times magazine poster for this episode: 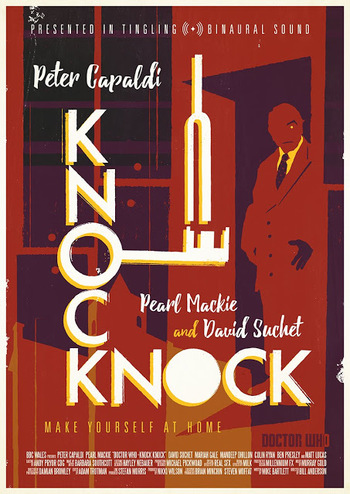 Who's there?
Shireen: So this house is eating people?
The Landlord: We must all pay our dues.
Bill: But not you?
The Landlord: Correct. I am the exception. For I am your landlord. You came here, you signed the contract. And now, it's time to pay.

The one with the monster house... made of monsters.note Not to be confused with Monster House, but the premise is very much the same- right down to the creepy old man.

Also, the one with Poirot.

Back in her own time and place, Bill Potts wants to move out of the flat she shares with her adoptive mother Moira and strike out on her own, but she and her five friends, all being students of little means, can't seem to find a decent place to live in a tight housing market. One day, the sextet is emerging from the student housing council in disappointment once again when a kindly older gentleman approaches with an irresistible offer...

The Doctor uses the TARDIS to help Bill move her belongings to the beautiful old house where she and her friends will each have a space of their own for dirt-cheap rent. But standing outside the house, listening to the wind blowing through the trees... the Doctor hears something that he realizes is not the wind.

To Bill's mortification, that night she and her friends (four of them, anyway — the other's been keeping to himself upstairs) discover the Doctor sneaking about the house, trying to figure out what it is that is making the place so noisy. The floors, the walls, they squeak all the time; it's an old house after all. Bill wishes her tutor (or, as she claims to her friends, "grandfather") would leave her be, let her have her own life. But she may not have it for much longer. Nor may her friends. What makes the house and its environs noisy is not the wind, or its age. It's something within the walls — within the wood, to be precise. Something that needs to feed, something the Landlord knows about, something that he can control for a purpose that will only be revealed if the Doctor and the others can make their way into the tower at the heart of the building...