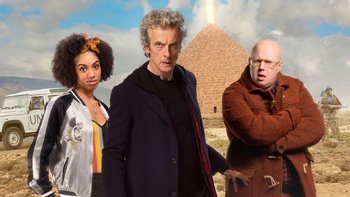 "We must be wanted. We must be loved. To rule through fear is inefficient."
Click here to see the Radio Times magazine poster for this episode: 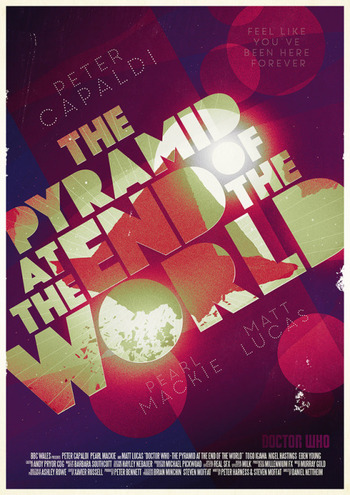 "Funny thing, fear, isn't it? Once it rules you, you're even afraid to admit what's scaring you."
The Doctor: Listen to me. Those creatures in that pyramid, they have studied your species, your civilisation, your entire history. They've run a computer simulation of this world since you lot first slopped out of the ocean looking for a fight, and they have chosen this exact moment and this exact place to arrive. Why?
Bill: Because a war's about to break out?
The Doctor: Possibly. But whatever it is, they're right here, right now because they believe humanity will be at its weakest.
Advertisement:

The one where Doctor Who, the fourth Indiana Jones film, and 12 Monkeys have a hot nasty threeway.

Written by Peter Harness & Steven Moffat and directed by Daniel Nettheim, this is the second part of the "Monks Trilogy" that began in "Extremis".

The Doctor knew that the Monks were coming. He didn't know when or where, but it would be at the most perfect time for them to conquer the Earth, for they saw all, knew all about the planet and its people... and him. Today is the day. In a war zone in Turmezistan, a pyramid appeared overnight, between the forces of the United States, Russia, and China. The U.N. calls upon him to once again take up his duties as President of Earth and investigate, and (against his will) he, Bill, and Nardole are soon there. The Monks are in the pyramid, and reveal their intentions: They are going to claim Earth and its people for themselves when they are asked to. Because they will be asked to. Because unless they are asked to save and enslave them, today is the day humanity is destroyed by its own hand.

Soon the Doctor, his friends and the U.N. and military leaders are shown a vision of a ravaged, lifeless world. All this can be stopped if the Monks are given pure consent, not out of fear or strategy, but out of love. The humans are anxious, but the Doctor will not let this stand. He is going to stop whatever this catastrophe is. As every clock in the area ticks towards doomsday, he realizes that the cause of it is not among the armies. It is somewhere else, a place where many ordinary choices, accidents, and mistakes are converging to create the end of life on Earth.

Even as he is still hindered by the blindness he is keeping a secret from everyone save Nardole, the Doctor pinpoints the location — a lab in the U.K. where a strain of bacteria has accidentally been created that ravages all forms of life. He is Earth's last, only hope to stop it from being released to the atmosphere. But in his determination, his hubris, he makes mistakes too, as do those left behind in Turmezistan, leaving the fate of humanity in a most unexpected pair of hands...