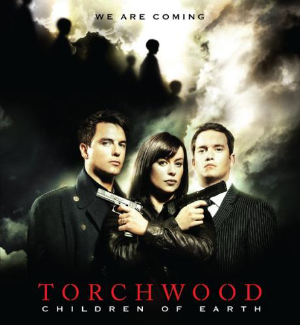 The third series of Torchwood, with a format changed from 13 mostly-standalones in series 1 and 2 to a five-part miniseries aired over a week in July 2009.

It's 1965. A busload of children, on their way to a new orphanage, stops on a country road in the middle of the night. The children dismount and — except for one — walk towards a bright light in the sky.

In 2009, the authorities have become alarmed by reports that every child on Earth became motionless at exactly the same time. A few hours later the same thing happens again, but this time the children deliver a chilling message en masse: "We are coming." As Torchwood investigates the affair in Cardiff, in London the Permanent Secretary to the Home Office, John Frobisher, is also trying to manage the crisis. The government then receives a secret transmission from an alien species referred to only as "456" who have apparently made contact with Earth before. Whatever took place on that occasion, it is a secret so terrible that Frobisher orders the death of all those involved in the affair — which includes Captain Jack Harkness and, by extension, all other members of Torchwood. As the team go on the run, the world waits for the impending arrival of the aliens. Over the next few days, humanity will discover just what lengths it will go — and to what depths it will sink — to ensure its own survival.

This series is considered to be one of the darkest stories in the entire Whoniverse, and many, including the cast and writers, consider Children of Earth to be the point where Torchwood conclusively stood on its own as a show and not just a spinoff.