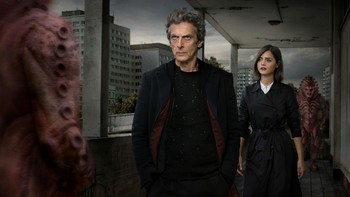 It took three Doctors to pacify the Zygons before. Now we need a fourth one to come finish the job. After all, there's four edges to every box- three to give it shape and one more to balance it all out.
Click here to see the Radio Times magazine poster for this episode: 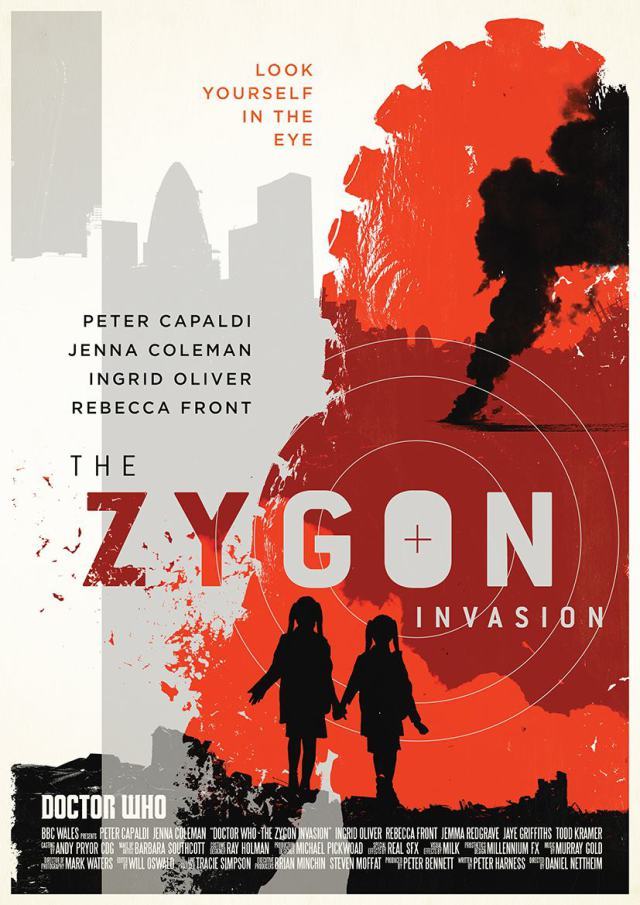 "Wow, we're identical!"
"Operation Double is a covert operation, outside of normal UNIT structures, to resettle and rehouse an alien race, in secrecy, on planet Earth."
— The Osgoods
Advertisement:

The one where Osgood is or isn't back.

Why all the ambiguity? Because screw logic, she's popular and that's all the rationale/excuse we need to bring her back.

A long time ago, the Doctor negotiated peace between humans and Zygons under the Tower of London. As a result of that peace treaty, there are now 20 million Zygons on Earth, living among the humans. It's a tense situation by any measure, and the peace has just broken. Osgood, the UNIT scientist and symbol of the peace, just sent him a message: "NIGHTMARE SCENARIO".

Clara arrives at her building and checks her phone to discover she has over 120 messages from the Doctor. Bemused, she starts to listen to the first one when she's distracted by a child crying on the steps. He can't find his parents, so she enters his flat and finds them. Everything's okay. She calls the Doctor back, wanting to know why he sent her so many messages.

The Doctor is at a park, trying to catch the Zygon commanders, who are posing as a pair of blonde twin girls going to elementary school. They don't believe he needs to interfere — and then the Zygon rebels attack and abduct them.

Clara and the Doctor link up with UNIT, and the problem is laid bare: the peace with the Zygons is breaking down. Osgood, the survivor, who won't tell anyone whether she's the human or the Zygon, is being held captive by the Zygon rebels. They sent a video. Actually, they sent two videos, the second showing the Zygon commanders being executed for perceived "treason". And, the Zygon rebels have taken over a village in Turmezistan that they're using as a training camp.

The Doctor, who enjoys "poncing about in a big plane", flies off to Central Asia to try and negotiate, while Clara stays behind in Britain to try and stop the rebels. And Kate Lethbridge-Stewart is off to America to visit the town where Osgood was last seen. But all is not as it seems...