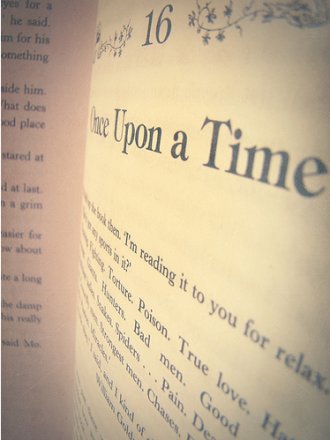 "We don't need lists of rights and wrongs, tables of do's and don'ts: we need books, time, and silence. 'Thou shalt not' is soon forgotten, but 'Once upon a time' lasts forever."
— Philip Pullman
Advertisement:

Once upon a time there was a trope. This trope was a Stock Phrase and a very old one. In fact, according to Webster's, it goes back at least to 1380. It began almost every Fairy Tale there ever was.

It was a very popular trope. In French it was il était une fois (Literally:"It was a time") and in German it was es war einmal, which literally meant "It was once." Sometimes it was translated as "Once there was" or "A long time ago," but most often, this trope was simply translated as "Once upon a time." Other languages have translated it directly. Russian fairy tales often start "Zhyl-byl...", that is, "Once there lived...". In Ireland it was " There was this man...." which comes from the Irish language " Bhí fear ann fadó...." (There was a man a long time ago...). Armenian folk tales would typically start with "There once was and was not", indicating that the story was fictional.

Now, stories that began with "Once upon a time" often ended with "...and they all lived Happily Ever After." But Once never got to the end of the stories — he always stayed at the beginning. And that is where he will always be.

Now, are you sitting comfortably? Then let's begin. Once upon a time... note there was a boy who decided to stay up late and read TV Tropes. Even though his parents had warned him that doing this was a bad thing, still he was compelled to do so. So, the lights of the screen illuminating his face, he carefully surfed the site, reading trope descriptions and examples, going over works pages and forum threads, until finally he looked at the clock and realized it was well past the reasonable amount of time one would surf the web. And then the boy knew his parents were right — that by surfing TVTropes, he had ruined his life in such a way that he could now never go sleep. He was cursed to forever surf TVTropes, haunting the Trope Launch Pad, quietly drifting from page to page like a ghost in the machine; until one day, he met someone who had been similarly trapped. She was named Trope-tan. Together, they decided that perhaps this wasn't such a lonely place to be stuck. And so they lived and troped Happily Ever After.

Once Upon a Time (Bare)

Jason's lowest moment. As he reflects on the mistakes he's made and the parts of himself he thinks are wrong, he desperately tries to turn to God for help.

Once Upon a Time (Bare)

Jason's lowest moment. As he reflects on the mistakes he's made and the parts of himself he thinks are wrong, he desperately tries to turn to God for help.