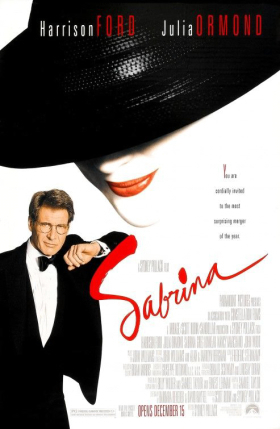 Sabrina is a 1995 Romantic Comedy that is a remake of the 1954 film. It stars Harrison Ford, Julia Ormond, and Greg Kinnear.

Linus and David Larrabee (Ford and Kinnear respectively) are brothers, the heirs to a wealthy family. Sabrina Fairchild (Ormond) is the daughter of the Larrabee family's chauffeur; she has a crush on David, but he barely knows she exists.

Sabrina comes back from an extended trip to Paris with a new look and a new sense of self-confidence. David is instantly smitten, but there's a problem: in Sabrina's absence, he's become engaged to Elizabeth Tyson, the beautiful and accomplished daughter of another business magnate. To avoid a scandal (and losing an important business deal with Elizabeth's father), Linus undertakes to keep David and Sabrina separated by romancing Sabrina himself.