Film / Once Upon a Time in High School 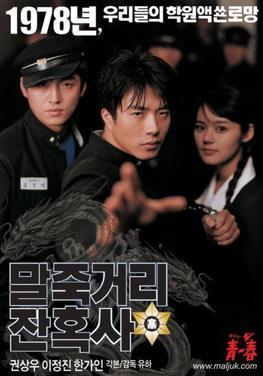 Once Upon a Time in High School: The Spirit of Jeet Kune Do is a 2004 South Korean action drama film. Set in Seoul in 1978, the film is about a teenager named Kim Hyun-soo who is transferred to a new school, which he has heard a lot of terrible things about. He confirms all the things said about the school when on his first day experiences violence and strict authoritarian brutality from the teachers as well as Jong-Hoon and his gang. Inspired by his hero Bruce Lee, whose movies he watched as a child, he starts training himself in Jeet Kune Do with nunchucks to deal with Jong-Hoon and his gang's reign of terror himself.

Aside from that, he also shares a romance with Eun-joo in which he and his friend Woo-sik have a conflict over, and struggles to meet his father's high expectations in his academic performance.

Tropes in Once Upon a Time in High School include: