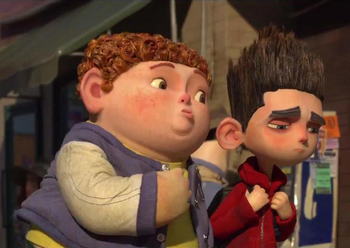 The Fat Best Friend is a common sidekick to The Protagonist. There are three core variants of this trope.
Advertisement:
Advertisement:

What makes this different from most of the other Fat tropes is that this character is always a Satellite Character and we rarely see things from their perspectives. They're there to enhance the protagonist's traits and to simply be a friend. A possible reason for this trope's existence is a desire to be more realistic and less discriminatory by showing that not everybody in the world has a generically attractive body shape (therefore avoiding Hollywood Pudgy, perhaps), but still avoid having a fat main character.

open/close all folders
Big and Brash