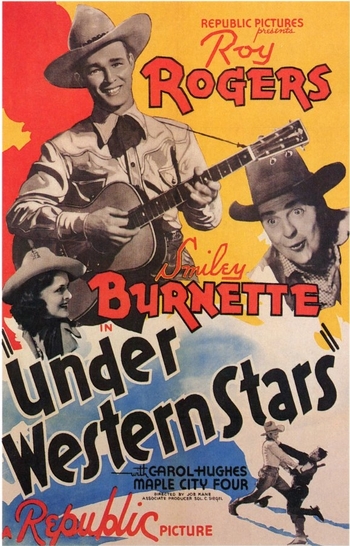 , has been further deprived of water by a rapacious water company that built a dam, which has dried up local streams. Desperate cattle ranchers have gone as far as raiding the dam and opening spill valves to return the water to their parched grasslands.

Roy decides to take more active measures by running for Congress against the incumbent representative, William P. Scully, a stooge of the water company. Roy wins, but still has to fight John D. Fairbanks, the owner of the water company. In this he is assisted by Fairbanks's pretty daughter Eleanor, who has feelings for him.

Under Western Stars was the first starring film role for Roy Rogers, who was already a big music star with his singing cowboy group Sons of the Pioneers. Rogers would eventually become known as the "King of the Cowboys", starring for decades in over a hundred films as well as stage and television.