Series / Guest from the Future 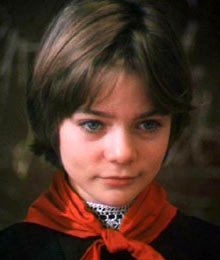 Прекрасное далёко...
Guest from the Future (Гостья из будущего) is a 1984 Cult Classic Soviet Science Fiction TV Mini Series directed by Pavel Arsenov. It is based on the book One Hundred Years Ahead by Kir Bulychev, part of a series about Alisa Seleznyova, a girl from the future.
Advertisement:

The series is considered a classic of Soviet sci-fi, and is often aired on television to this day. It exemplifies the optimism the Soviets had for science, technology, and futurism, as well as their faith in children. The film was followed by a sequel, Lilac Sphere. The theme song "Prekrasnoye Dalyoko" (typically translated as "The Wondrous Future") by Yevgeny Krylatov has also become very popular. The star, Natalia Guseva, was inspired by her role to become a scientist herself. The Fan Sequel Guest From The Future 2 may be seen here

The 5-episode miniseries was a co-production of Soviet Central Television and the Gorky Film Studio, with its original run airing from March 26-30, 1985.