Literature / One Hundred Years Ahead 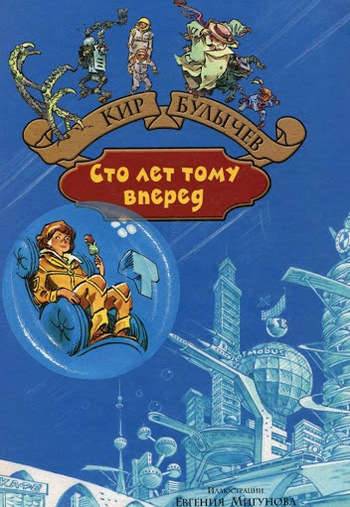 The first part, Guest from the Past, is about a boy called Kolya who discovers a time machine in his neighbor's apartment. He goes one hundred and six years ahead and decides to explore the futuristic Moscow, as the Institute of Time is closed for a holiday and nobody stops him. He eventually comes to Cosmozo, the zoo for extraterrestrial flora and fauna, and finds out that: a) the director's daughter Alice has a mielophone, a machine for reading minds; b) two bandits are going to steal it, as in, right now. He manages to distract the bandits and snatch the mielophone from them, and, as they chase him across the city, just barely manages to return to his own time.

In the second part, Three K, it's revealed that Alice has also followed Kolya and has ended up in 1976, with a concussion after a traffic accident during the chase. She befriends Yulia Gribkova who is her roommate in the hospital, and finds out that Yulia is in the same class as Kolya (he has written his name on a bench in Cosmozo). The problem is that there are three Kolyas in the class, and Alice doesn't know the last name of the Kolya she needs. On top of it all, the Space Pirates don't want the mielophone to slip through their fingers, either.

The novel features examples of: