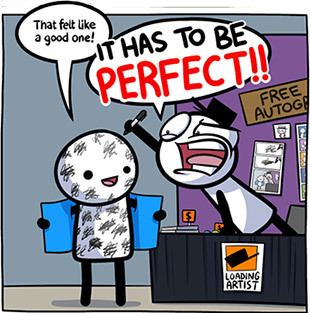 "I don't need a me who isn't perfect!"
— Ayaka, Kiss and White Lily for My Dearest Girl
Advertisement:

A character that has to be perfect at what they do, or at everything they do.

There's a variation when some sort of special event is going on, where there's usually one crazy organizer who takes charge and the rest just go along. This chief organizer has a pretty good chance of becoming an overbearing perfectionist.

Of course, said person obviously needs to learn that nothing is perfect in life. After all, if it was, it'd be pretty boring. Whether or not the message gets through is up to the character.

In a Four-Temperament Ensemble, this character is Choleric or Melancholic.

Compare and contrast Super OCD (even if in Real Life perfectionism is more likely to be a trait of OCPD), as well as the Ultimate Life Form and Go-Getter Girl, who is "perfect". Also compare the Broken Ace, who often overlaps with this character. Contrast Deliberate Under-Performance, when a character goes out of their way to not be perfect at something.

Ideally I'd Deal With It

Ideally I'd Deal With It