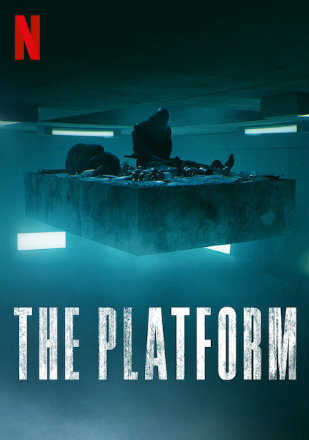 "Hunger unleashes the madman in us"
—Trimagasi
The Platform is a 2019 Spanish horror/thriller film directed by Galder Gaztelu-Urrutia.
Advertisement:

The movie takes place in a vertical prison that is divided into levels, each with two prisoners and a hole in both the ceiling and floor. Each day, a platform full of immaculately made food descends through these holes and stops at each level. Prisoners are given a limited amount of time to eat what they can before it leaves their level and goes to the one below them. Due to the greed and privilege of the prisoners who reside in the higher levels, the food is invariably reduced to scraps after a while, while the lowest prisoners can only dream of getting that much. The movie focuses on an idealistic newcomer who came to this hellhole of his own accord, and tries to provoke change among the prisoners and thereby send a message to the administration.

The panna cotta is the message.