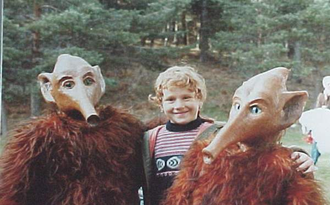 A little boy named Tommy (who has an extensive array of pets he likes to call "specimens") finds an alien egg to hatch. When it hatches, Tommy names the creature—who manages to use his snout to suck up peanuts and warp time and space with his fingers—Trumpy. Unfortunately, Trumpy's mom is found by poachers (who destroy all of her pod-like eggs) and goes on a killing spree in response. To add to the terror, a group of unappealing young people takes a break from recording nightmarish "pop" music to travel by RV up to the scene of the alien foothold. When one of their members is killed by the alien, they are drawn into the hunt for the culprit.

The film is as much of a mess behind the scenes as it is on-screen. Los Nuevos Extraterrestres (The New Extraterrestrials) began its life as a low-budget horror film. Then, after the initial script had been written, the producers demanded the addition of the subplot about the little kid adopting the alien

, in a blatant attempt to cash in on the success of E.T. the Extra-Terrestrial. It was filmed in Spanish and French. For the US release it was (badly) dubbed into English and retitled The Unearthling. Then, when the copyright expired, the distributor Film Ventures International purchased the film, slapped the credits from a completely different film onto the beginning and end, and changed the name to Pod People

Not to be confused with People Jars, which involves Jar People, or Invasion of the Body Snatchers, which features pod people, unlike this movie.