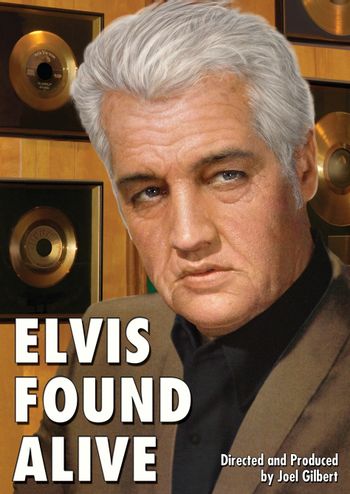 "If I'm ever gonna tell my story, now's the time."
—Elvis Presley (or so this film wants us to believe)

2012 Mockumentary about the original king of Rock 'n Roll himself, Elvis Presley, from the same people who brought you Paul McCartney Really Is Dead. Much like how that film was based on the urban legend that Paul McCartney died in 1966 in an automobile accident, this film is based on the urban legend that Elvis is not dead, and that he merely faked his death. But to this day, has never disclosed his reasons for it.

The story goes that after returning to Los Angeles from a vacation in Graceland, The King's estate, director Joel Gilbert got word from the staff members of his production company, Highway 61 Entertainment, that they have just received what appear to be F.B.I. files on Presley. After going through hours and hours of undoing as much of the ink on the files as possible, some shocking discoveries were made: They were sent to a guy named Jon Burrows. According to the film, Jon Burrows was an alias Presley would use whenever he would travel. Even more shocking is that some of the files were dated after August 16, 1977, the day Presley died. Upon getting his address, they are in a loss for words when they find out that Elvis Presley is alive after all! And interview is then conducted with him the following day.

Though much more convincing than Gilbert's other mockumentary (hell, the fake Elvis does a damn good imitation), it's still cheesy as hell, though, and not to be taken seriously. Celeste Yarnall, Elvis' co-star in Live a Little, Love a Little, guest stars in this film as herself.