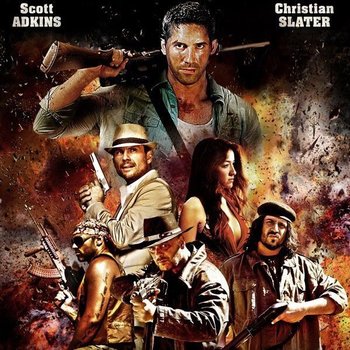 Scott Adkins is The Man! note ... but seriously, that's his actual name in the movie. For real.
Advertisement:

A nameless drifter, called "The Man" (Adkins) wanders into the desert town of El Fronteras carrying a duffel bag full of money. El Fronteras happens to be run by a local drug cartel led by the sinister Culebra, who had the sheriff Chief Espinoza under his payroll, and they're not going to let The Man leave. Action ensues. Loads and loads of it.

The movie's overall theme and setting pays homage to classic Spaghetti Westerns of the 70s, featuring nameless gunslingers as protagonists who wanders into towns occupied by dangerous thugs, although much of the action scenes are influenced by modern-day directors and choreographers, such as a 5-minute, uninterrupted action scene lifted from John Woo's catalogue of films where Scott Adkins' character marches into a shantytown occupied by at least 40 mooks, leaving piles and piles of dead bodies everywhere he goes. With a runtime of only 70-odd minutes, El Gringo is immensely entertaining.

It is also currently Adkins' highest onscreen bodycount to date, where he left behind at least 65 corpses from beginning to the end of the movie.