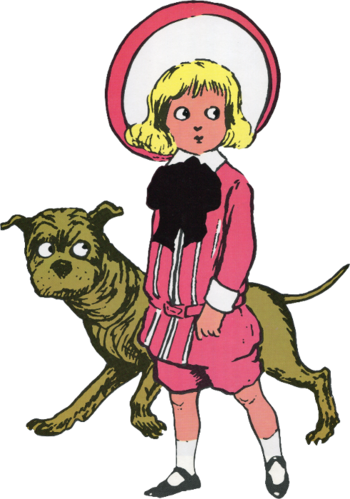 Buster Brown and his dog, Tige.
Though today the name is synonymous with shoes (as a 1904 licensing deal resulted in his becoming the mascot of the Brown Shoe Company), Buster Brown was originally a comic strip character created in 1902 by Richard F. Outcault.
Advertisement:

The comic strip began in the New York Herald on May 4, 1902. Outcault left for William Randolph Hearst's employ in 1906, and after a court battle, Outcault continued his strip, now nameless, in Hearst papers, while the Herald continued their own version of Buster Brown with other artists. The latter lasted until 1911 or so, and Outcault's version until at least 1921.

A city-dwelling boy with wealthy parents, Buster's actions belie his pretty looks. Essentially an Edwardian era Dennis the Menace, he is a practical joker who might dress in a girl's outfit and have her wear his clothes, break a window with his slingshot, or play a prank on a neighbor. The trick or transgression is discovered and he is punished, usually by being spanked by his mother, but it is unclear if he ever repents. Many strips end with Buster delivering a self-justifying moral which has little or nothing to do with his crime.

Accompanying Buster in his adventures is his dog, Tige, who is thought to be the first talking pet to appear in American comics. Often he will warn Buster in vain about the trouble he is about to get into.

Mary Jane, Buster's sweetheart, wore the style of shoes that would eventually bear her name.

The comic strip provides examples of: