Don't Make Me Take My Belt Off! 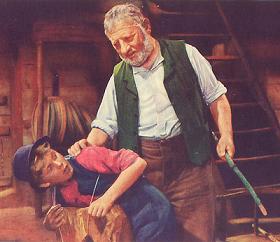 "This is going to hurt me more than it hurts you..."note Nah, that's a lie. It's gonna hurt you a lot. I'll be alright.
Bug: My father? Very strict. It didn't matter that I was the youngest, when I would act up, he gave me his belt.
Dick: You wore the same size?
Bug: No, as punishment he would put me over his knee and give me a whooping.
Dick: He gave a "whoopin'" and a belt?
Bug: With a belt.
Dick: And then he gave you the belt?
Bug: Um...yeah.
— 3rd Rock From The Sun
Advertisement:

Little Jimmy's done it now. His dad is angry, and this is a crime worthy of far more than a Time Out. And Daddy's getting out the belt. This ain't gonna be pretty.

Truth in Television. Corporal Punishment has been around since practically the beginning of time. More and more parents are considering it barbaric in the 21st century, but it still goes on. Values Dissonance tends not to be called out, (like other forms of punishment/abuse) because of how common an occurrence this trope was in Real Life for anyone born in the mid 20th century and earlier, and how common it is in certain cultures. Heck, many parents still use spanking today, despite the current culture drifting against it.

Of course, in the comedic version, the father takes his belt off, raises his arm to apply some pain, and his pants immediately fall down for want of a belt to hold them up.

Sometimes this trope is inverted when the father, after realizing he has been unfair with his son, hands his son the belt at the last minute and tells the boy to spank him. And despite the fact that we're mostly talking about fathers and sons, mothers and daughters are just as likely to apply for this trope, especially the Apron Matron disciplining the Bratty Teenage Daughter.

"You're not too big to turn over my knee" is a common variation. A variation of this trope in a Southern US setting is "Do you want me to cut a switch"?

A common and rather peculiar feature of this trope is that the son or sometimes daughter who is threatened with the belt is often high school or even college-aged, but no one on the show seems to find it odd that they are still being spanked as if they were children. A possible explanation is that young kids may make up a large part of the shows' viewers and hence may find this sort of punishment relatable. Alternately, older people probably remember too well when THEY were spanked/beaten as punishment.

Related in spirit to Get a Hold of Yourself, Man!, but different in application.

It can be coupled with (and the result of) Calling the Old Man Out. Depending how it's portrayed, this can occur in many places along the Sliding Scale of Parent-Shaming in Fiction; it could be anything from genuine Tough Love to a misguided Overprotective Dad to outright Abusive Parents. Compare Would Hurt a Child which is more about unrelated strangers willing to destroy a child out of sheer sadism rather than old-fashioned discipline.

Subtrope of Corporal Punishment; compare A Taste of the Lash. Compare and contrast the Sister Tropes Comedic Spanking and Kinky Spanking.

Marc has to drag Steven out while Marc's mom starts to use his own belt to strike him.

Marc has to drag Steven out while Marc's mom starts to use his own belt to strike him.