Film / Bastard out of Carolina 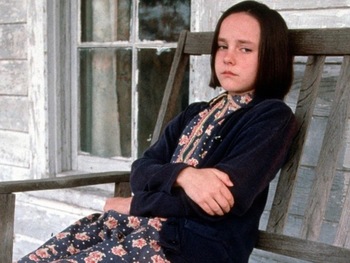 "The day I was born started off bad, and it only got worse."
Advertisement:

A 1996 drama film directed by Anjelica Huston, adapted from the 1992 novel of the same name by Dorothy Allison.

Set in 1950s rural South Carolina, the story centers around Ruth Anne "Bone" Boatwright (Jena Malone) and her mother, Anney (Jennifer Jason Leigh). Initially, due to being born out of wedlock, Bone just lives with her mother and extended family in the poorer parts of town. Even though she loves Bone, Anney hasn't really grown up too much and gets tired from working to support her and Bone and is needed for attention, coupled with having to deal with the stigma from having a baby out of wedlock.

After her kind and hardworking husband Lyle Parsons (Dermot Mulroney) is killed in a car accident, Anney goes on to remarry Glen Waddell (Ron Eldard), who at first seems nice and caring. However, after Anney has a stillbirth, things head south really fast.

Alternative Title(s): Bastard Out Of Carolina