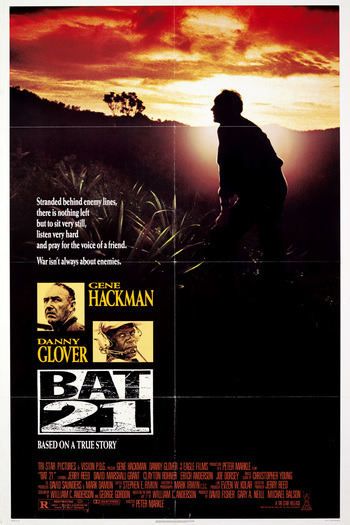 The film, adapted by William C. Anderson from his own 1980 book of the same title, is Based on a True Story about the controversial (and very costly) rescue of U.S. Air Force Lieutenant Colonel Iceal "Gene" Hambleton (Hackman), after he survives being shot down over Vietnam, finding himself directly in the path of the North Vietnamese Army's Easter Offensive of 1972.

Hambleton is an electronic warfare specialist who spends his time playing rounds of golf when not monitoring an instrument panel "at 30,000 feet with a cup of coffee" in front of him. But while flying a reconnaissance mission for an upcoming bombing strike, Hambleton's plane is shot down deep behind enemy lines and in the middle of the area to be carpet bombed the next day.

He spots a small propeller driven plane nearby and via emergency radio he is able to contact its pilot, Captain Bartholomew "Bird Dog" Clark (Glover), who attempts to guide him to safety from the air. On the run from the NVA and the impending air strike, Hambleton sees the horrors of war up close for the first time, and must rely only his wits and a voice on a radio to keep him alive.