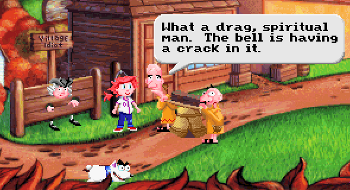 That's not all that's wrong here.
Developed by Sierra in 1993 as the first of a series (that unfortunately never took off), Pepper's Adventures in Time was an adventure Edutainment Game starring sharp-witted tomboy Pepper and her charmingly vicious dog, Lockjaw.
Advertisement:

During another lovely day of playing fetch and antagonizing the neighbor lady, Pepper accidentally stumbles upon her crazy Uncle Fred getting ready to unleash a diabolical revenge on society. Sick and tired of being mocked for his radical ideas, Fred has constructed his masterpiece: a Time Machine capable of rewriting history and putting him in charge of everything! The first target? None other than Benjamin Franklin, whose life and works played a key role in bucking English control over the American colonies.

Pepper and Lockjaw look on as Fred dumps some doctored "essence of 1968" into the machine, transforming the Founding Father into a blissed-out, spineless flower child. They try to stop him, but are sucked into a portal and tossed into 18th-century Pennsylvania. Pepper needs to meet Ben Franklin, reverse Fred's anachronistic edits, and save the future of the United States - all while keeping an eye on Lockjaw!

In addition to the standard Walk/Look/Touch/Speak/Item options, Pepper's Adventures has a "Truth" button that briefs the player on the real history behind its characters and environments. A quiz on these historical tidbits concludes each act.