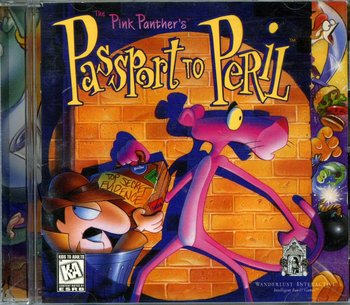 Pink Panther's Passport to Peril is a 1996 Edutainment Adventure Game from Wanderlust Interactive based on the 1993 iteration of the cartoon.
Advertisement:

The Pink Panther is given an assignment by Inspector Clouseau to protect the sons and daughters of world leaders at the prestigious Camp Chilly Wa-Wa, a summer camp so exclusive, no one even knows its exact location. Things get complicated when The Dogfather and his two assistants Pug and Louie arrive, claiming to be from a camp inspection agency, looking for reasons to shut the place down. However, the plot really kicks in when a camper begins feeling homesick...

One of the main focus points is traveling to the various countries the campers hail from (England, Egypt, China, Bhutan, India, and Australia), solving puzzles and learning about their country along the way. But the more you travel, the more you learn of a much sinister plot unfolding back at camp.

The game comes with an in-game PDA, which acts as an encyclopedia on various topics on each country you visit. It also comes with a jukebox that plays music videos that appear in the main story.