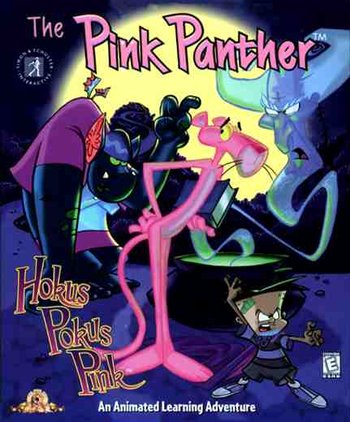 Pink Panther: Hokus Pokus Pink is a 1998 Edutainment Adventure Game from Wanderlust Interactive. It is a sequel to Passport To Peril, and it picks up not long after that game's conclusion.
Advertisement:

Pink has left Clouseau's agency (you would too if you had to be an undercover lunch lady) and has become a Traveling Salesman selling books. His latest stop is at a dinner party hosted by the Perpetual Smiler dentist Dr. Periowinkle and his wife, who are auctioning off their newest treasure, the Stars Byte collection, a series of jewelry made from the teeth of celebrities. But things get weird(er) when Violet, the daughter of a wealthy businessman attending the party, accidentally gets turned into a mutant wombat by the Periowinkle's estranged son and wannabe magician, Nathan.

As it turns out, he's been stealing spell books and other things from an evil warlock named Strangeblood, who lives in the woods behind their mansion. Pink, who witnessed the entire thing on his way to the bathroom, is roped into finding the ingredients needed to counter the spell Violet is put under before the party is over.

Much like the first game, Pink has to travel to various countries (Israel, Russia, Kenya, Indonesia, and Greece) to solve puzzles, find the ingredients needed, and gather missing pages from one of his books that got lost via the spell. This time around, you can jump between two countries at a time with the help of Spot, a black hole owned by Strangeblood.

The game retains the jukebox from the first game, with five new songs. Instead of the PDA, you're given the BOK aka The Book of Knowledge, one of the books Pink is selling.

Some rats sing a jazzy song about how they're pests who cause all sorts of trouble for humans. However, they also assert that "you're gonna need us anyway."

Example of:
You Dirty Rat!

Some rats sing a jazzy song about how they're pests who cause all sorts of trouble for humans. However, they also assert that "you're gonna need us anyway."