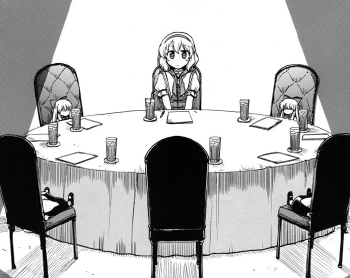 At least they have good table manners.
"You want to know why I have a bunch of weird dolls of all the girls? I have a lot of time on my hands."
— Anemone, Sleepless Domain
Advertisement:

A friendless female character who, to ease her loneliness, spends her time making or collecting dolls. Seeing her kneeling or sitting surrounded by her dolls, with a sad look on her face, adds to her Woobie factor.

Not always a child; in some cases she's an adult with a Kitsch Collection. Though if she is a child, she might have doll tea parties to make up for the fact that she has no real friends to invite. She might be in the Princess Phase because she's a Lonely Rich Kid or imagining that she and the dolls just have to wait until her hero on his White Stallion would come to rescue her or she has a Changeling Fantasy of how her parents are actually royalty.

May or may not be dark and disturbing.

See Marionette Master, Baby-Doll Baby, Mummies at the Dinner Table, and Living Doll Collector for when the Lonely Doll Girl takes it too far.

Not to be confused with the The Lonely Doll series of picture books by author Dare Wright, in which the doll herself is lonely.

If you were looking for lonely girls with a "doll-like" quality, you may be looking for the Rei Ayanami Expy.