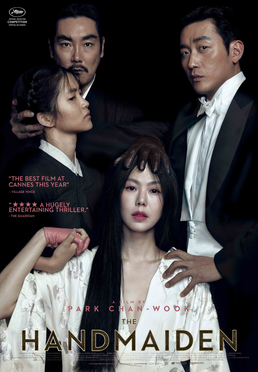 "If she could be yours for ten minutes, what would you give in exchange?"note "Whatever your heart desires. Anything in this whole wide world."
Advertisement:

The Handmaiden is a 2016 film directed by Park Chan-wook. Based on Sarah Waters' novel Fingersmith, the Victorian-era British story is transferred to Korea in the 1930s, when the country had been occupied by Japan and its people systematically oppressed and their culture forbidden.

Count Fujiwara, a Korean Con Man who poses as a Japanese nobleman, recruits the low-level criminal and pickpocket Sook-hee to help him scam the wealthy but isolated Lady Hideko out of her vast fortune: Fujiwara will woo Hideko and convince her to marry him, assisted by Sook-hee who will pose as Hideko's maid and persuade her of his beneficent qualities, and after the wedding they will have Hideko committed to an insane asylum and disappear with her fortune. However, not only are there greater evils present in the mansion than Sook-hee imagines, but the plan is complicated by her own growing attraction and empathy for the lonely, beautiful Hideko.

Watch out for major, unmarked spoilers.