Literature / The Heritage of Shannara 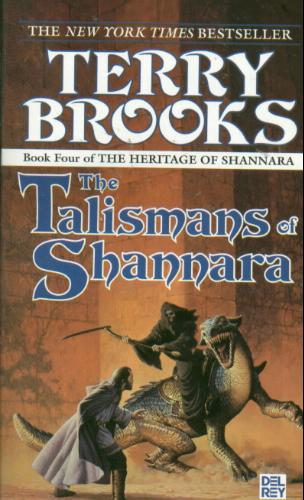 The sequel to Terry Brooks's best-selling Sword of Shannara Trilogy, Heritage of Shannara is a quartet of novels that follows the Scions of the Elven House of Shannara as they attempt to save a world that's done its best to outlaw what they are.

The series opens with Scions of Shannara. It's been three hundred years since the death of the Druid Allanon, and the Four Lands are barely recognizable. The Southland-based Federation has expanded to include most of the known world. The Elves have vanished, the Dwarves are enslaved, driven to the edge of extermination, and magic is outlawed. Worse yet, dark magical creatures known as The Shadowen have appeared, their very presence sickening the lands.

Realising that something has to be done, Allanon's shade sends Cogline, a former Druid, to summon the Heirs of Shannara: Par, Coll, Walker, and Wren. He then hands each of them a charge: Par must recover the Sword of Shannara, Wren must find the Elves and convince them to return to the Four Lands, and Walker must bring back Paranor and the Druids. Most of the remainder of the book is spent with Par and Coll, and their friend Morgan Leah, who, with aid from Padishar Creel and the Free-Born, attempt to find the Sword.

As the book closes, things are looking grim: a traitor enables the Federation to destroy the Free-Born, Coll is captured by First Seeker Rimmer Dall, who convinces Par that he has accidentally slain his brother, and Morgan's magic sword is shattered. Worst of all, Dall allows Par to escape with the Sword, which he cannot seem to activate, after revealing that the Federation is in fact under Shadowen control.

In Druid of Shannara, we shift focus to Walker Boh, who after finally accepting the Call to Adventure, attempted to retrieve the Black Elfstone, needed to revive the Druids, only to be left half-dead from joint attacks by the Asphinx (a snake whose bite petrifies its victims) and Rimmer Dall's Shadowen. He is saved by Quickening, Elemental daughter of The King of the Silver River, who recruits Walker, Morgan Leah, and a Federation assassin named Pe Ell to help her retrieve the Black Elfstone from Uhl Belk the Stone King, a rival Big Bad. With assistance from a Tracker named Horner Dees, a tunesmith named Carisman, and a whole lot of luck, the group manages to dodge the Stone King's monsters, retrieve the Black Elfstone, fix Morgan's sword, and seal up Uhl Belk within his own domain, though at frightful cost to themselves.

In Elf Queen of Shannara, Wren Ohmsford and her companion Garth make the journey to the island of Morrowindl to recover the Elves. They find the Elves besieged by so-called demons, later revealed to be Shadowen of the Elves' own, accidental creation. Wren discovers that she is not just an Ohmsford, but also the granddaughter of the Elf Queen, which, along with her use of the Elfstones, triggers an identity crisis that will nearly cripple her at a number of vital moments. Realising that Morrowindl will soon be destroyed, the Elves shrink their capital city down, allowing a party of nine men (including Wren) to try and transport their entire Race to the beach, where a Wing Rider will take them back to the mainland. They are successful, though only a few of them survive.

The series comes to a conclusion in The Talismans of Shannara. Walker has become the first of the new Druids, Wren and the Elves are back and preparing for war with the Federation, and only Par has yet to fulfill his charge, by successfully using the Sword of Shannara. Nor will he, if Rimmer Dall has anything to say about it. Using a Brain Washed And Crazy Coll as bait, he captures Par and begins the torturous process of breaking down his mind, trying to convince him that he is a Shadowen, even as he dispatches the might of the Federation army and the deadliest of his Shadowen to harass and eliminate Walker and Wren. The race is one to see which fails first: the Shadowen? The Shannara heirs? Par Ohmsford's mind? Or perhaps our own...

The character sheet can be found here

Alternative Title(s): The Druid Of Shannara