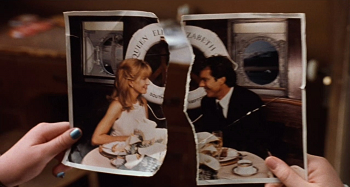 You may know the scene. The hero has half of something, like a letter, a Treasure Map detailing the MacGuffin's location, or a MacGuffin proper; but without the other half it's useless or indecipherable. Eventually they casually mention this to a friend or a rival... who then double-takes and pulls out the other half.

The details of this scenario can vary. Usually both characters wind up with the halves independently, having been aiming towards the same goal the entire time. The discovery of the other half can lead them to either quickly start working together (a convenient excuse for a Rivals Team Up), or start fighting each other for the other half. Another variation has the characters receiving the halves at the same time, but due to the passage of time or other circumstances, they are not aware any more of who has the other half; at least until said owner reveals it.

It doesn't have to be a map, letter, or MacGuffin; it can be any important clue that's divided in pieces and worthless if not whole. It also isn't restricted to just two halves; it can be several pieces in the hands of several characters, making up a "collect the plot coupons" story.

This trope does not refer to an object simply being separated and handed over to different people in full knowledge of who the owners are. There has to be a certain element of surprise, or at least a lack of willingness on who gets each half if the separation is forced.

Closely related is an everyday object - a business card, a dollar bill, a coin, a plastic token, etc - that has been torn/broken in half as a means of identification; as it's extremely unlikely that another broken object will match up with either piece, it can be used as a relatively secure equivalent of a Trust Password.

Related to Dismantled MacGuffin, which can be a good source for these situations.