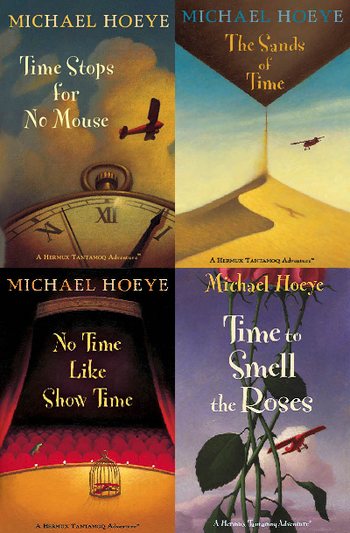 The Hermux Tantamoq Adventures, written by Michael Hoeye, are a series of children's detective novels set in a Mouse World version of a modern-day city. The title character Hermux Tantamoq is a mild-mannered mouse watchmaker and Amateur Sleuth who solves his cases with the help of his pet ladybug Terfle, his love interest Linka Perflinger, his mentor Mirrin Stentrill, and various colorful and endearing friends. His recurring adversary is his neighbor: a vain, self-centered cosmetics tycoon named Tucka Mertslin, whose moneymaking schemes and bad taste in men often land Hermux on her bad side.

There are four books, all idiosyncratically named with titles referring to time: