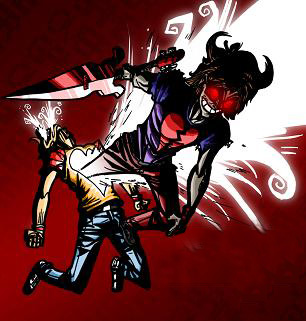 "Don't bother, your voice can no longer reach him where he is. His heart belongs again to darkness! All worlds begin in darkness, and all so end. The heart is no different. Darkness sprouts within it, it grows, consumes it. Such is its nature. In the end, every heart returns to the darkness whence it came! You see, darkness is the heart's true essence."
— Ansem, Seeker of Darkness, Kingdom Hearts
Advertisement:

The Heartless are monsters born out of people's negative emotions. They can be a special case of Body Horror, but can also be a part of the victim's Soul Anatomy that has been separated from them, and like a ghost they may not have a physical body at all — in which case, they may be considered a kind of Tulpa. This part of the soul may represent all of a person's animalistic desires without any of the restraint, similar to a Jekyll & Hyde situation, or all of their feelings of suffering, sadness and anger condensed into a distinct figure. They can be a convenient Monster of the Week, since they are an unlimited resource; there always seem to be plenty of victims loaded with problems and angst for The Heartless to feed on. They can also have a self-propagating "zombie" effect.

The trouble for the heroes is that these are difficult to get rid of, especially if The Heartless still displays an awareness of the world (usually, as a ruse of the Enigmatic Minion). If an established character becomes one of The Heartless, they may act as if they have undergone a Face–Heel Turn.

The All-Loving Hero's power is usually to combat The Heartless, or even to heal them. The Anti-Hero or Well-Intentioned Extremist usually insists the victims are too far gone and should be put down before more people get hurt. Occasionally, a victim who is Fighting from the Inside can resist The Heartless' control.

Depending on the context, this trope may be a subtrope of Abstract Apotheosis. This is because nearly every series that this trope is used in presents these critters as An Aesop about them being in everyone's hearts. Contrast/See also Made of Evil.

Not to be confused with the Let's Player of the same name, the film Heartless (2009), or the single Heartless by Heart.