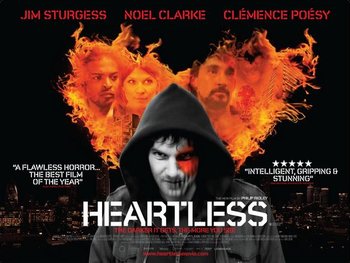 Jamie Morgan is an aspiring photographer who has very prominent birthmarks on his face (which is shaped like a heart) and arm. He tries living a normal life, but is continually stared at and teased by various people. He receives a summons to a dilapidated flat block and given a chance by the sinister Papa B to be rid of his marks for a price. Jamie takes it and feels much more confident and happy in his life, getting a chance at a relationship with aspiring model Tia. However, he must hold up his end of the deal with Papa B and is forced to cut out a man's heart and place it on a church's steps or suffer the consequences.
Advertisement:

A very well done indie film and star turn by Jim Sturgess. While having a simple story, it's very well written and acting and can be genuinely frightening at several points.

Not to be confused with The Heartless, or the 2014 Bollywood medical thriller of the same name.